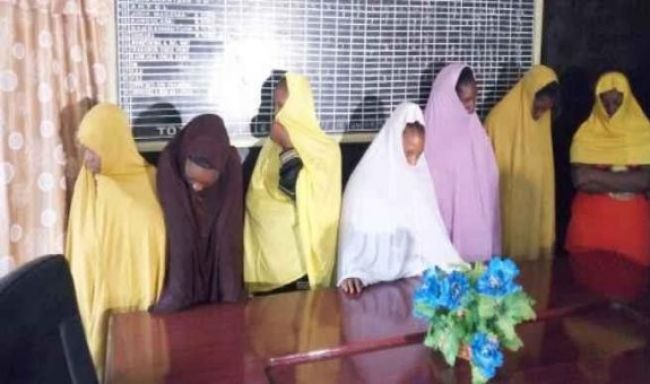 The Nigeria Immigration Service (NIS) command in Katsina state, arrested seven girls using hijab to disguise in a bid to evade arrest, as they attempted to travel illegally through the state to Europe.

Parading the girls, the Comptroller of Immigration in the state, Mohammed Yaro Rabiu, said the hijab was used by the girls to camouflage and get easy passage at the border.

“All the rescued victims are Nigerians from Edo State and will be handed over to NAPTIP for further action,” he said

The girls are part of the 40 persons that have been arrested in the last four months as they attempted to flee Nigeria using various legal and illegal routes to Agadez in Niger Republic en route Libya then Europe.

The arrested victims include Dennis Igbobo, Elvis Osas, Earnest Ugiagbe, Bright John, Lucky Iyare, Gift Osagie, Godday Ruth, Ovioma Gift, Otoboh Favour, Believe James, Endurance Idemadia and Marian Josiah. One of the girls, 27 year old Favour, who is the eldest daughter in a family of 6 and a graduate of Mass Communication, said lack of jobs prompted her to seek for other options abroad.